“And were an epitaph to be my story,
I’d have a short one ready for my own.
I would have written of me on my stone:
I had a lover’s quarrel with the world. “

On November 14, 1962, a small, frail figure stood at the center of the University of Detroit’s Memorial Building.  No one noticed his shaking hands; they were focused on his voice, his humor, and his way with the crowd.  Surrounded by an eager audience that filled the building to capacity, Robert Frost delivered his final public lecture. 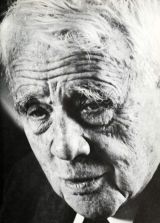 Frost had a reputation as a performer of his delivered lectures.  He masked his shyness with an entertainer’s flair.  This was his way of connecting with his audience on a grand scale, to share a bit of himself in a manner that felt beneficial for all concerned.   Imagine how this might have been for the audience there, under the same roof with the amazing man.  For them, it must have been as if, for that brief time, they were given access to the sublime power of poetry’s subtle expressive art in human form.

And he was in the perfect place to deliver this poetic access.  U of D in those troubled years, like many universities, was ready for a new way of understanding the social changes taking place in the U.S.  Poetry helped express a connection to humanity through an emotional rather than analytic perspective, a way of breaking down the strict rules governing societal conduct at the time.  U of D recognized the vital role this perspective could play in a well-rounded education, and it turns out that communication is indeed key to connecting with others in the conversation of the working world post Academia.   Poetry helped get that broader conversation started.

Not too many people outside of academic circles knew of Frost’s role as teacher.  Image 326 (page 322) of the 1963 Tower Yearbook lets the reader know that he “… served as poet teacher at the universities of Michigan, Yale, Harvard, Amhurst, and Dartmouth; taught at Breadloaf College in Connecticut every summer until his death.”

Robert Frost died in Boston on January 29, 1963. (Biography of Robert Frost)   Those who attended this final lecture here at U of D were presented with a brief glimpse into the life of an American original.

Michael Heffernan, one of three University of Detroit students chosen to write poems for Frost’s visit to Detroit (last stop on a tour of several cities that year), wrote the following poem from the Campus Detroiter.  This poem appears at the bottom of image 322 in the 1963 yearbook:

IN MEMORY OF ROBERT FROST

The effort of diving: of turning
To salt and wind: the tumbling minute
Of last speaking: of becoming and of
Torment : of dissolution: the spreading
of digestive lime
Over full days and many “‘words and breathings
That have no echoes:
Today, what there was of him suffocated
And had no words; but something
Else ran off like a colt drinking wind.