The Future of the Moving Pictures March 2014

You may have surmised by now that my current favorite archive is the Tamarack.  What a wonderful find this collection is! Opening these dusty pages is like finding hidden treasure. These young student writers, likely only published in this one tome, were the reporting witnesses to an age that valued insight and “letters” (or writing well) over technological witticism.

The Tamarack spans the early years of the university’s history, and mostly the early years of the 20th century.  The first quarter of this new century seemed open to radical change and technological miracles … and they seemed constant: the sad end of the Titanic; the bitter fighting in World War I; the virulent strain of influenza sweeping the planet; societies world wide rocked by revolutions, violent riots, and union strikes. While all this turmoil was going on, Einstein was writing his theory of general relativity and Henry Ford was busy organizing the first assembly line.  Henry Ford’s work alone would make a major change in industry that would affect much of the country’s work force.

Peeking into the pages of the Tamarack issues published during these years, is a way of seeing these events from a particularly focused point of view. In any case, the changes taking place during these troubled years must have been on the minds of the students at U of D as they considered their futures. And, to me, returning to this frame of reference in these mute pages is very valuable.

So while reviewing the June, 1915 issue of the Tamarack the other day, I chanced upon this great essay titled, “The Future of Moving Pictures.” It may have been Henry Ford’s impact on production that inspired the writer’s perspective, or maybe he was just responding to the turbulence of the times. In any case, he saw the potential for this cinematic novelty as a tool for instruction and not just entertainment.  I found this very insightful and wondered why it took so long for the social world to embrace this perspective in the same way this young man had back in the early days of movie history. 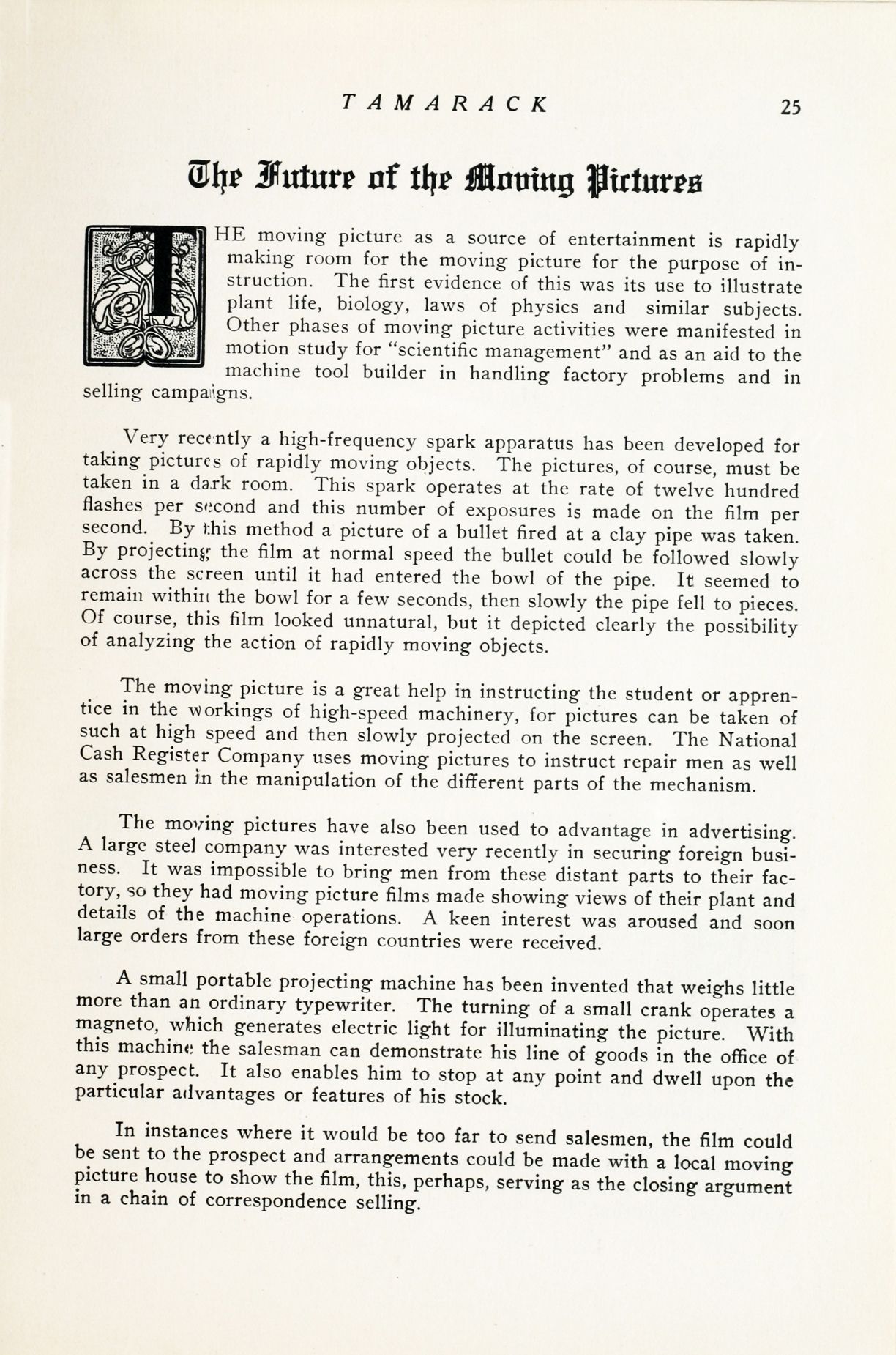 The Future of the Moving Pictures, Tamarack June, 1915

Skip ahead to 2014 (just shy of 100 years) and you have youtube! Like a lot of ideas ahead of their time, this one just took off and got crazy effective!