In 1940, the Sisters of Mercy established a presence in Detroit at Southfield and West Outer Drive. About a year later, Mercy College of Detroit began offering classes on this spot that would leave an indelible mark in this city’s history. Over the years until its consolidation with the University of Detroit in 1990, Mercy College expanded from offering nursing and teaching classes to women into a comprehensive coeducational liberal arts college.

In October 1941, the first issue of the Mercy College newspaper, then called “Outer Echoes,” was published. The first column on the first page of this issue welcomed the first classes to this new college on September 8, of that year. Even in its publication infancy, this first issue is loaded with information regarding the beginning of this new institution of higher learning. We can read about the dedication ceremonies, along with details of the elections and activities involved with the opening of a new college. We can see who was chosen for each important aspect of the governing of this new institution, along with photos of the bright faces of those who could consider themselves the first students in what would become such an influential school for those to follow. On page 3, we get a glimpse into one of the dorm rooms at “McAuley Lodge” (the residence building at the time), along with a brief description of campus life written by excited freshmen.

Four pages of history are here in this issue of the Mercy College Newspapers digital collection for your review. It’s worth the time just to look at the photos! But linger a while in these pages, and I think you’ll be pleased by the treasure you’ll find. 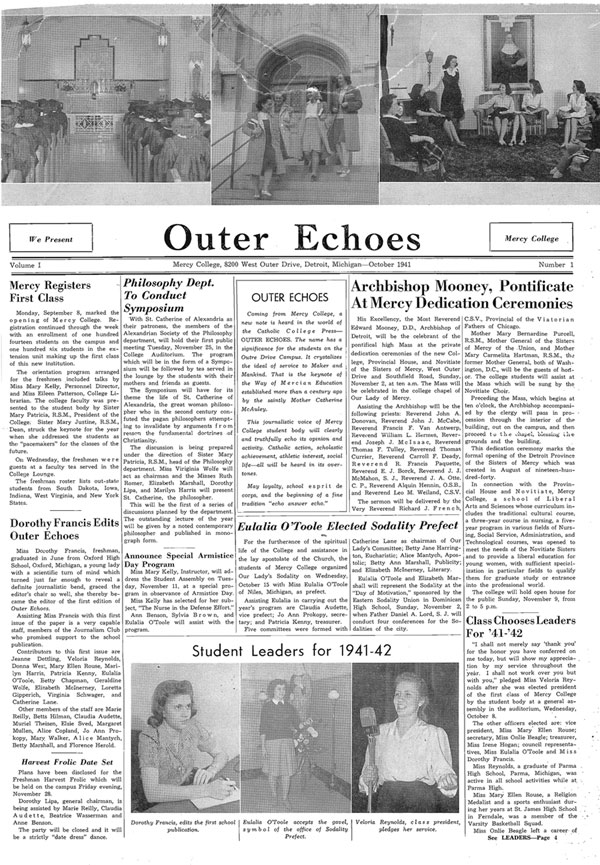