One hundred years ago in December, 1914, the University of Detroit celebrated the upcoming holidays with a special “Xmas Number” edition of the Tamarack.  The look of this issue is slightly different, but the material included is just as creative and interesting as all the others.  Reading through some of the stories and poetry included in each Tamarack publication allows the reader to time travel a bit; but the December, 1914, issue offers a glimpse into Detroit’s place in a unique period in U.S. history.

The Tamarack is not just about nostalgia, however.  As the country was swiftly growing into the new century, much like today, the attachment to the familiarity of what was is even now strongly felt in this Tamarack’s perspective. A longing for home in those early years of the last century, often meant a longing for the country and the family farm.  Memories of childhood, changes in the seasons, and the anticipated holiday gatherings were then presented in clear juxtaposition to the noisy bustle of a growing city those writers knew.  Today these sorts of memories hold a different significance and importance to the fast pace of our modern perception.

The important political issues of today held a different meaning to those who awoke that Christmas morning in 1914 to the exciting promise of a more bountiful new year just ahead.  Immigration in those days was not a matter of keeping out illegal aliens but about managing the sheer numbers of immigrants flooding onto our shores.  The country in 1914 was on the brink of WWI, and no previous conflict could prepare us for what was waiting to take thousands of lives. Our primary goal regarding war was about victory (“might makes right”), not about human rights back then. The political environment was one of restriction and control, and this was reflected in the quickly changing policies regarding women’s rights, prohibition, and economic growth through manufacturing and trade.

And then of course, Henry Ford stood at the ready with jobs, and the ability for the average worker to realize a greater income working fewer hours than was previously the case.  This meant the promise of more leisure time: time spent on education, reading, and art.  (This was the time when Jazz was coming into its own in the northern states, and the assembly line was enhancing the quality of life for so many Detroiters by helping redefine what “leisure” really was.)

The main goals for the graduates of 1914 were advancing with industry, finding a place in the rapid growth of corporate America, and defending the country from those who would interfere with this rush of progress. The focus of the “Xmas Number” Tamarack was on nostalgia, the changing seasons, and just getting through to graduation.  All the excitement of the bright future those students saw before them was waiting for them at the other end of the holiday season.  All the goofing and friendship they had enjoyed during their carefree college years at U. of D. were bound to pay off in more of the same forever and ever.  Right? 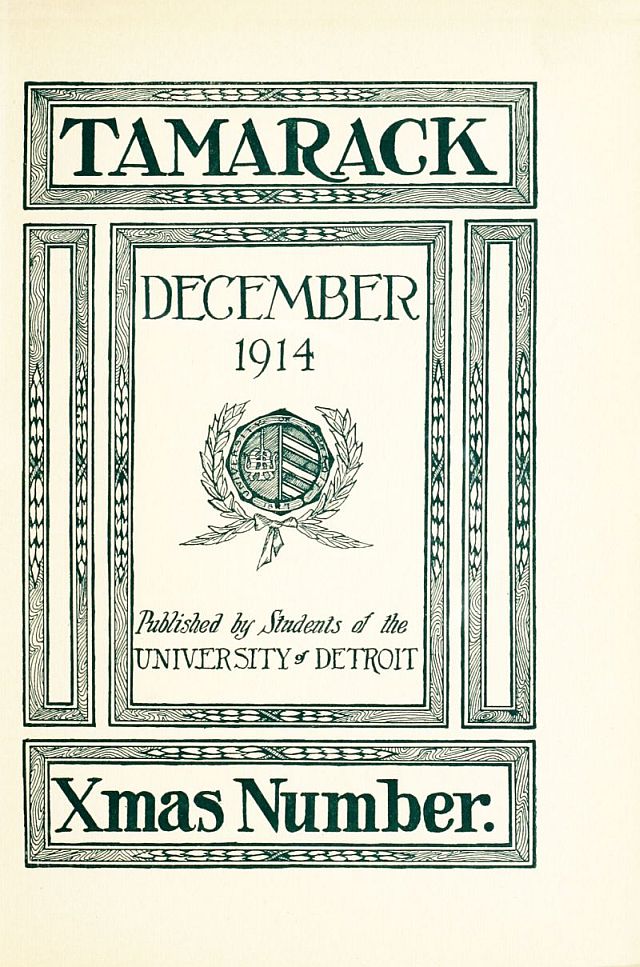