Alexander Crummell, among other Black Abolitionists of his day, spoke frequently and eloquently about the plight of the slave and the cause of freedom. His thoughts were offered not just to those with the power to free the enslaved portion of the population, but to the slaves themselves, encouraging them to live full and productive lives, urging them to be strong in their religious convictions, and offering them words of hope and comfort.  He also stressed the importance of education and the idea that an educated population was a successful one.  Although few slaves had the option of a formal education (in most places during this time, educating the slave was illegal), this was the key to their futures.

Few people have heard of this great man or know the legacy of his great works. Not only was he a wonderful orator, he was also very involved in the political “agitation” (as it was known then) toward a reasoned governmental approach to the question of slavery.

Reading through the many speeches and editorials from Crummell in the Black Abolitionist Archive, we learn that he moved to Liberia in 1853, at first as a missionary, then as a proponent of the American Colonization Society (an organization he had at one time spoken against).  This group was dedicated to relocating newly freed slaves and free people of color to newly settled areas in Africa and the West Indies. Crummell worked to help establish Liberia’s capital, Monrovia, in the newly independent country, along with converting the native people to Christianity.

His strong beliefs in the welfare of his people are obvious in his writings and speeches.  Crummell’s speech on education is among the few handwritten speeches in the Black Abolitionist archive.  Included with the transcription of this speech are his editing marks and notes. This allows the reader to not only get a feel for the way the speech was delivered, but it also allows the reader to step inside the thoughts of an amazing man working tirelessly for a noble cause. 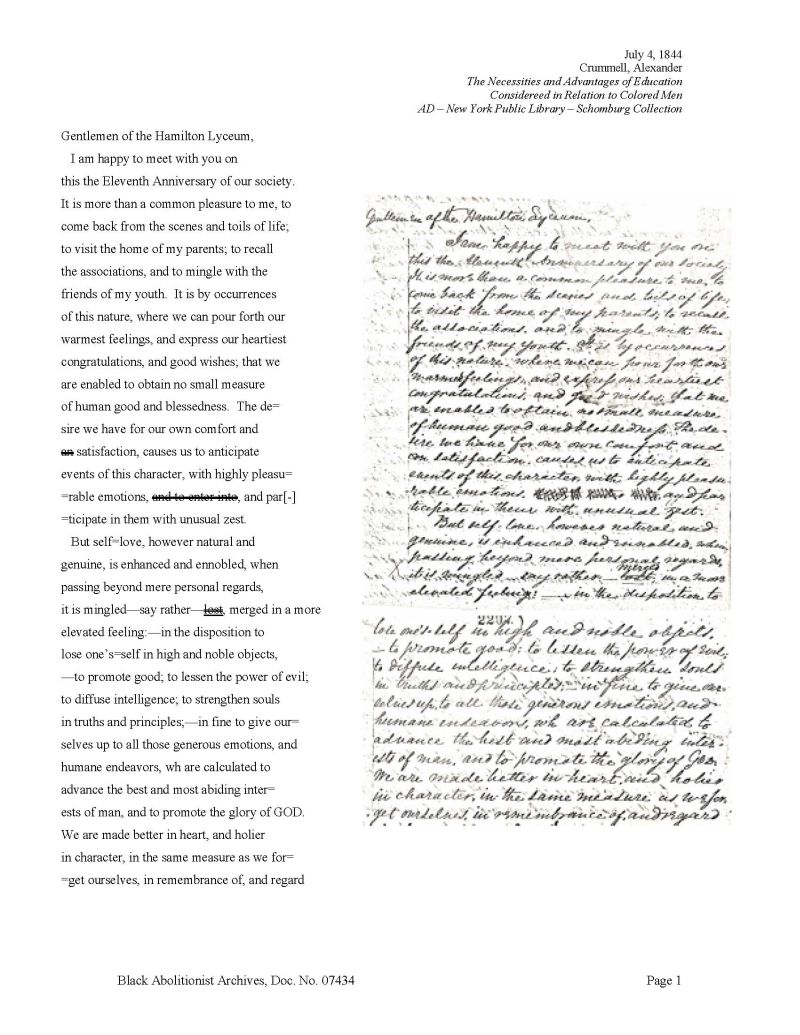 This is the first page of a 50 page document delivered before the members of the Hamilton Lyceum on July 4, 1844. Interested?  Read more here.