Items of College History: The Picnic of the Acolytes March 2015

Long before the world became a blurry line of activity speeding towards the future, Detroit College was a seemingly gentle place filled with the hum of academic learning in the classical sense.  Students, dressed in business attire, dutifully sat in stark classrooms memorizing dates and names and theories at wooden desks lined up properly in front of filled blackboards and pacing professors.  After class, the halls were likely filled with chuckles and guffaws at jokes that have become tired and boring in the century since.  It’s easy to imagine these students walking to their classroom buildings through the bustling streets of the economic boom of downtown Detroit in the late 1800s.  They were the future of Detroit, rowdy and driven, and it was these students who would pen the prose and poetry that would be bound and published in the Tamarack, a student publication that appeared between 1890 and 1923.

The digitized collection of the Tamarack offers readers a rare glimpse into not only the day to day life of the University of Detroit students during this time, but also of the time itself.  Unlike photographs which present one static perspective of the past, writing offers insight into the heart and soul of the people who lived, worked, played, and learned there.  The story shared here is just one example of this.

A lot of the Tamarack issues included a section called Items of College History which contained a mishmash of anecdotes, fiction, and humor.  The page shown here is the first of three telling the tale of an 1881 picnic to Grosse Pointe taken by professors and students by “covered wagon” from downtown Detroit.  Readers will encounter a unique treat, and may feel inspired enough to read more. 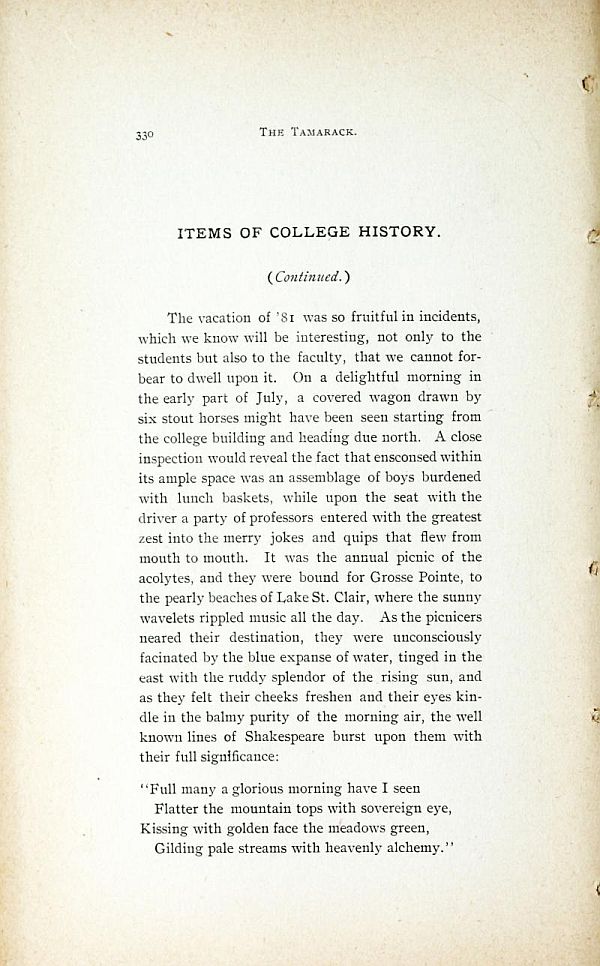