“Our Assumed Literary Apathy” May 2015

William Wells Brown was unique among Black Abolitionists.  That he was of mixed blood, tracing his maternal grandfather to a famous name (Daniel Boone), was not too unusual for his time. He was also an escaped slave, which was also not that unusual for many Black Abolitionists.  But unlike many who devoted their lives to fighting this unjust institution, he was a self-educated writer, lecturer, and historian who became the first African American to publish a novel.

In 1863, William Wells Brown published his book,  The Black Man: His Antecedents, His Genius and His Achievements (now available online).  His own history is described in the first few pages under the heading, MEMOIR OF THE AUTHOR, and a portion of that is included here. The book itself was evidently received with mixed reviews.

“I WAS born at Lexington, Kentucky. My father, as I was informed, was a member of the Wickliffe family; my mother was of mixed blood; her father, it was said, was the noted Daniel Boone, and her mother a negress. My early life on the plantation was such as generally falls to the lot of the young slave, till I arrived at the age of nine years, when my position was changed. My master’s brother lost his wife, she leaving an infant son a few months old, whom my mistress took to bring up. When this boy became old enough to need a playmate to watch over him, mistress called the young slaves together, to select one for the purpose. We were all ordered to run, jump, wrestle, turn somersets, walk on our hands, and go through the various gymnastic exercises that the imagination of our brain could invent, or the strength and activity of our limbs could endure. The selection was to be an important one, both to the mistress and the slave. Whoever should gain the place was in the future to become a house servant; the ask-cake thrown aside, that unmentionable garment that buttons around the neck, which we all wore, and nothing else, was to give way to the whole suit of tow linen.”

These things alone are remarkable. And knowing that anyone with access to the Internet now has easy access to this material is amazing considering the tumultuous years that followed the publication of Brown’s work.

But what isn’t known by many about the early response to this book is also available in the Black Abolitionist archive, and it sits quietly waiting to be discovered.  Written during the final years before the Emancipation Proclamation, the hope for a brighter future is felt even in these defensive words. 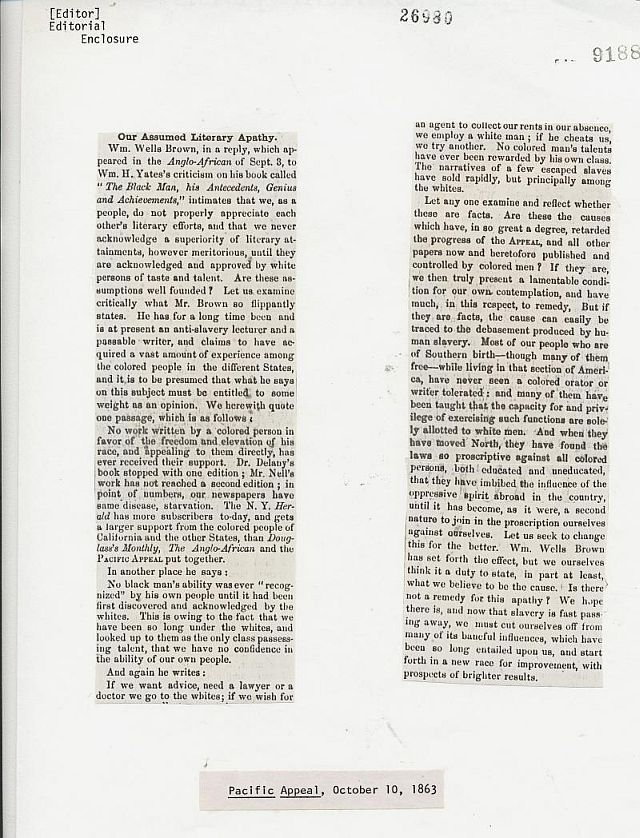