“The Proposition is Peace” September 2015

In March, 1775, when Edmund Burke addressed the English House of Commons, the affairs in America had reached a crisis point.  Attempts to keep the Colonies under control were failing, and failing in a big way.  Burke decided to offer a plan to resolve the growing discontent in the Colonies in a way he hoped would be fair to all concerned.  His objective was to maintain peace by offering concessions, and it would take quite a sales job to get “buy in” on this plan from those who had favored a strict hand with these impudent “children” of Mother England for so long.

Burke begins his speech with reason, and keeps to this reasoned approach the entire way through:

“To restore order and repose to an empire so great and so distracted as ours is, merely in the attempt, an undertaking that would ennoble the flights of the highest genius, and obtain pardon for the efforts of the meanest understanding. Struggling a good while with these thoughts, by degrees I felt myself more firm. I derived, at length, some confidence from what in other circumstances usually produces timidity. I grew less anxious, even from the idea of my own insignificance. For, judging of what you are by what you ought to be, I persuaded myself that you would not reject a reasonable proposition because it had nothing but its reason to recommend it.”

This one afternoon in the history of this country is a relatively small part of the turmoil to follow. Yet in 1899, 124 years after it was delivered, this speech was studied in detail by students at the University of Detroit. From it they gained insight into the use of logic, the formation of governments, and the idea that power often succeeds through the use of negotiation and cooperation, not domination. The success of force is not only uncertain, but temporary. England’s realization of this, however, would come later.

Daniel C. Lawless contributed often to the Tamarack over the years of its publication.  In 1900, he earned a Bachelor’s Degree (A. B.) in Business, and then disappeared into the working world. The articles and work he left behind, however, are now an important part of the Tamarack archive.

Lawless’ article on Burke’s speech ends in this February edition of the Tamarack just as it was really getting interesting.  The final sentence leaves the readers with a tease, “To Be Continued.”  It finishes in the March, 1899, edition (image 25). 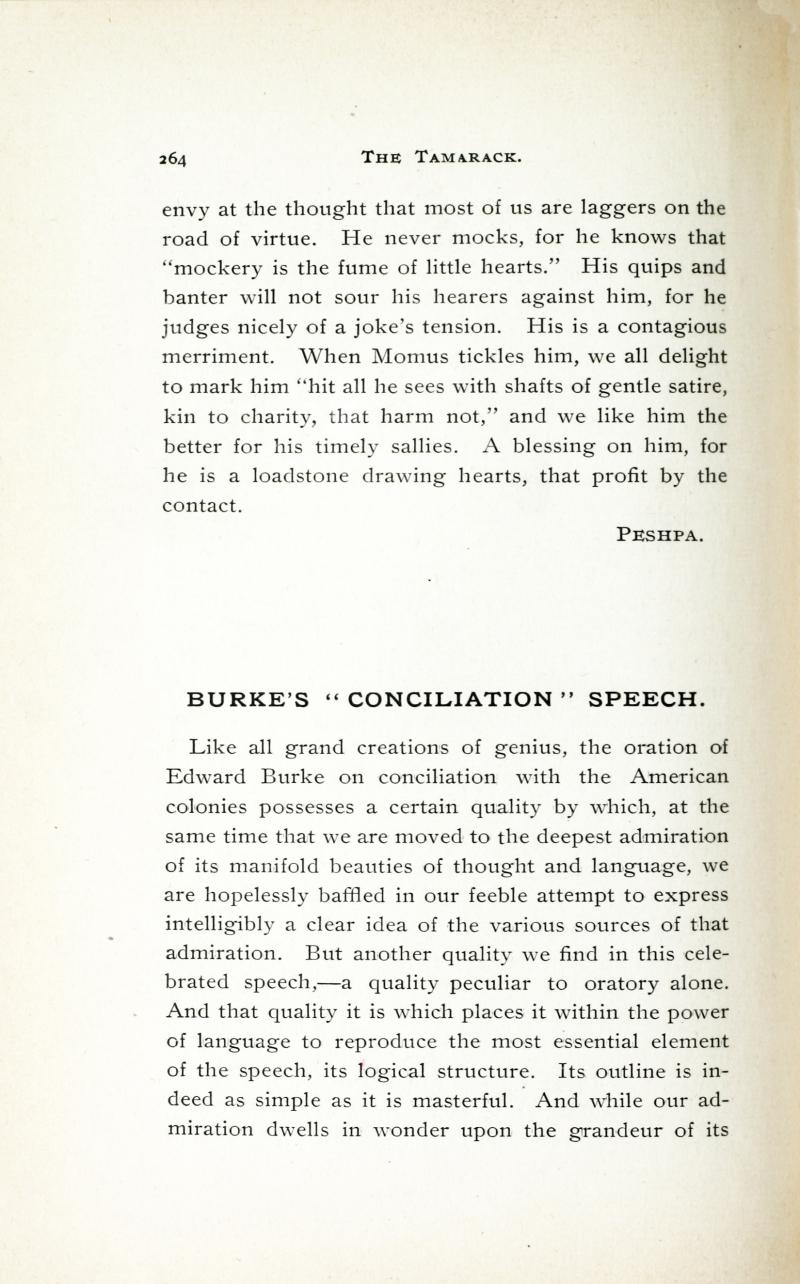