Shortly after the declaration of World War I, University of Detroit students began marching drills in the playing field next to the Jefferson Street campus.  These would later become more serious as an officer from the Thirty-First Michigan National Guard was obtained to guide these drills.  Without really realizing it, students, who had previously held hopes for careers in business, finance, and engineering were being groomed for war.

This image (on page 122 of the University History archive 1877-1977) takes us to a time when no one really knew what to expect of war on this scale.  The down turned faces of the students here indicate a confusion of inner questioning, hidden fears, and loyal camaraderie.

This page of the University Histories archive goes on to tell us that:

“A month later, the student reporter for the Michigan Catholic summarized the progress of the training as follows.  He wrote: ‘The daily hour’s drill in the college department grows more strenuous as the weeks pass.  At first it was something new and novel, but now that is has become a fixed assignment for each day, it no longer possesses any novelty.  Fortunately, it is a prescribed duty, hence there is no shirking it or begging off. Most of us are glad that the drill is of obligation and yet we are sufficiently human to wish otherwise.’” 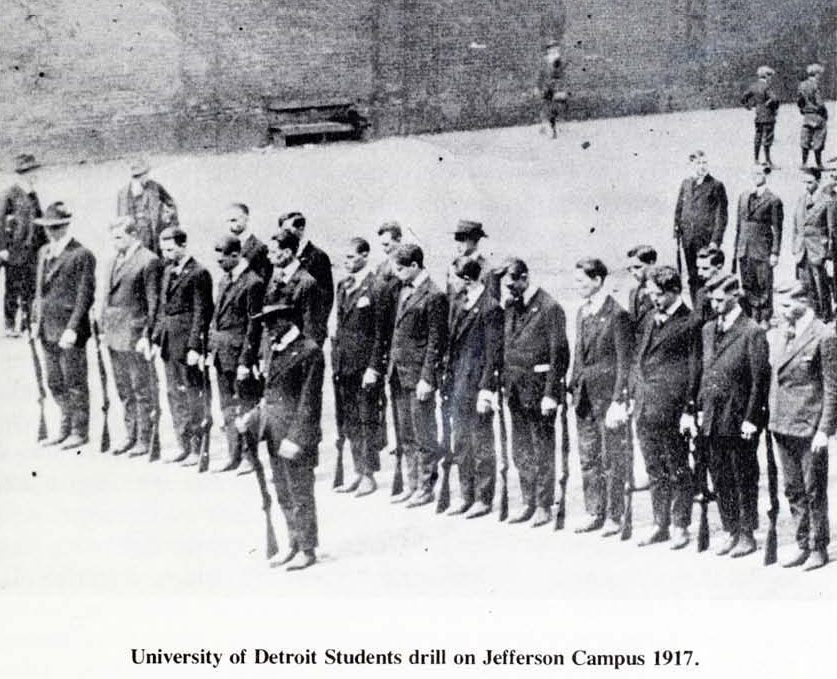