No one saw it coming.  It’s only a game after all, right?  Lots of students, who were more interested in academics and had never bothered with attending the games, hardly noticed the decisive blow that officially ended Varsity football at the University of Detroit.  But when it was officially ended on November 30, 1964, the serene setting of this peaceful campus exploded into screaming chaos resulting in two nights of student rioting that some will not soon forget.

The popularity of Varsity football had a slow, steady climb at the University of Detroit from the first game to its official demise in 1964, but in its final years it struggled to survive.  Yet when the death knell chimed, it was just too much for hundreds of student fans to accept quietly.  The timeline in the 1973 yearbook notes that the announcement sent them “screaming and running” into the streets, blocking traffic and removing traffic lights on Livernois and Six Mile.  The rioting mob continued on down Livernois, and spilling onto the Lodge, successfully prevented traffic from flowing there.  The 1965 Tower reports that rioting lasted two nights, with approximately 800 students participating the first night, and a thousand taking part on the second night. 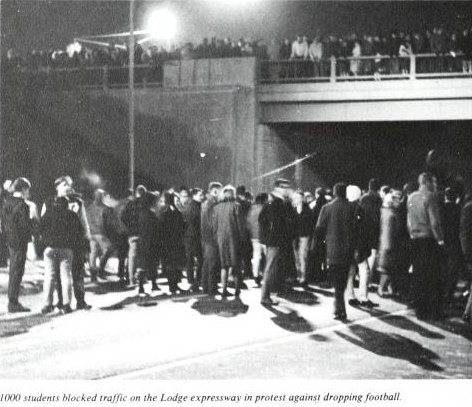 The rioting that resulted from the news of the Varsity football cut allowed a release of the anger that came from feeling unable to stop what everyone feared was coming.  Frustration took them into the streets, anger kept them there for two nights; the cold and the threat of police action, took them back to campus, deflated and resigned.

It didn’t help that the final year was so miserable.  The team had realized a steady decline that contributed to dwindling attendance and resulting financial woes.  By this point, attendance had dwindled to just under 12,000 fans per game, which meant a loss of around $65,000 (according to page 257 of the 1965 Tower yearbook).  It was no longer feasible to keep football going.

This poor performance continued into the 1965 season in games played after the axe fell.  It seemed all the steam had gone out of the team’s will to succeed.  What was the point?  The players were committed, however, and so the Titan team fulfilled its commitments, even mustering up enough energy to beat Dayton at one of the final home games 21-6.

As university officials desperately tried to resolve the mass anger and frustration with paltry solutions (Club football being one), in the end, all efforts proved unsuccessful.  Football was no more.

Football first started at U of D to encourage enrollment and help build the university.  The end came as it had begun, with the signing of a formal agreement, and an eye on financial resources.  The university powers that be had concluded that the value was just not worth the cost.

For all their efforts, those who rioted that dark November had to simply stand back and watch their beloved team sport fizzle, sputter, and die.  The stadium would soon follow.