In 1863, the debate about establishing a national day of Thanksgiving was well underway.  On September 28th of that year, Sarah Hale, American writer and editor, wrote an impassioned letter to Abraham Lincoln encouraging him to set aside an official day to recognize the spirit of thankfulness that defined the country overall.  This, she argued, would be of benefit to the entire population especially during this time of civil war.

Included in her letter (on the last page) is a clipping from an editorial she wrote for her Lady’s Book magazine that says,

“The influence of these state seasons of sacred remembrances, high aspirations, and tender . . . rejoicings would not only be salutary on the character of our own citizens, but the world would be made better . . . . If the germ of good feeling be ever so deeply buried under ‘the cares, and riches, and pleasures of this life,’ it may be brought out by sympathy and vivified by culture and effort.”

On August 8, of that year, however, the Pacific Appeal newspaper had already taken the first step with their own celebration of Thanksgiving.  In this case, the celebration was in connection with the already celebrated August 1 anniversary of Emancipation Day in the British West Indies (August 1, 1834).  Emancipation Day was renamed “National Thanksgiving Day” temporarily (and likely just for San Francisco) as a way for those of African decent in this county to be included in this debate.  Presented as a national holiday, the article cleverly presents its case to those readers who were already celebrating this annual holiday in the African American community.

For more information on the Black Abolitionist Archive, please visit our Special Collections page. Spending time perusing this and other collections is a great way to discover something interesting during the holiday break or any time. 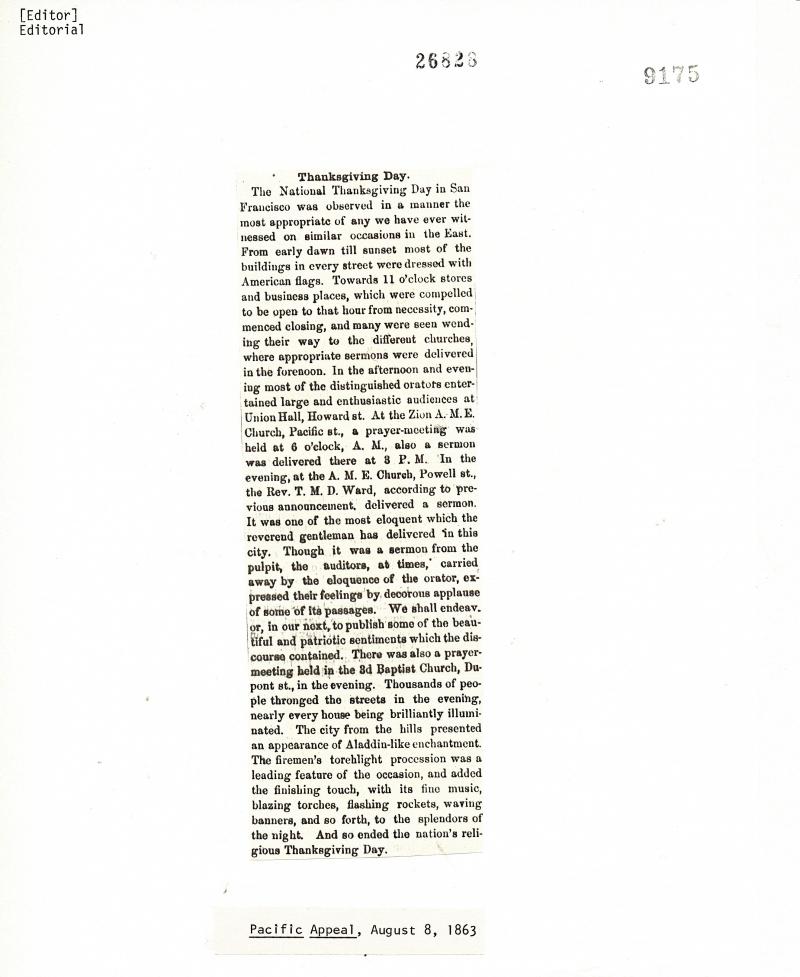