The Struggle for Freedom: A Sibling Rebellion February 2013

One prominent member of the Black Abolitionist movement was a man named Charles Lenox Remond (February 1, 1810 – December 22, 1873).  Charles Remond was considered one of the great orators of this movement and indeed of his time, but little is remembered of him.  Those in the Black Abolitionist movement who, like Remond, devoted countless hours, energy, and determination to end the horrors of slavery are overshadowed by the social memory of men like Frederick Douglas and George Washington Carver.  And while most black abolitionist men are not remembered, it’s rare that anyone even knows about the existence of black abolitionist women who fought alongside these great men.  Sarah Parker Remond, Charles Lenox Remond’s sister, was one of these women.

According to her biography published at the National Women’s History Museum web site, Sarah Parker Remond was born into a family of eight children in Massachusetts in 1826.  Although her family was considered “free,” they were not free of the prejudicial social restrictions of the time.  Dealing with this type of oppressive environment encouraged several members of Sarah’s family to take up the cause of abolition, and Sarah and her brother Charles became prominent in this struggle.

Like a lot of black abolitionists of her day, Remond traveled and lectured throughout the U.S. and Great Britain usually speaking before groups formed to work for the welfare of the poor and downtrodden.  Often speaking on the same stage with those working for the Temperance movement, Remond appealed to the firm determination that women in this struggle offered.  Her commitment to this cause not only compelled her to push past the restrictions of her race but also the social constraints of her gender.

In England, Sarah Remond’s speeches praised the efforts of all women in their fight for charity and comfort for those unable to care for themselves.  And while slavery was abolished in Britain in 1834, her continued “agitation” for the abolishment of slavery in America encouraged the subtle persuasion these groups had over commerce and trade produced by enslaved American workers.  These days efforts such as these may be thought of as encouraging sanctions.  The idea behind this urging was for the English government to say, “If you continue to produce goods using slave labor, we will purchase our products elsewhere.” 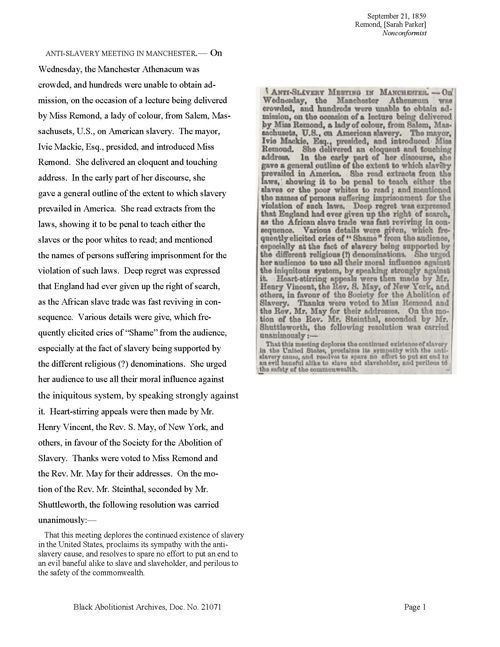 Learn more about Sarah and Charles Remond at the Black Abolitionist Archive.  Read some of the greatest speeches ever written by the unsung heroes of a turbulent time in American history (audio adaptation of some speeches also available).