Organized football began at the University of Detroit (then known as Detroit College) in 1896.  It quickly became a popular aspect of the school for students, faculty, and administration, as well as the local community.  As the team evolved, the game went from a rough and tumble brawl on a muddy field to a polished and important part of college life.  Interest soon ensured that fans were kept informed about the players names and season statistics.  Add a bit of artwork and some advertising, and a first quality printed history of the game emerges.

This continually growing collection of pamphlets and memorabilia is now available digitally.  The archive offers viewers not only a colorful evolution of football at the university, but a history of the school itself. From small college to growing university, the archive allows viewers to track this progressive change over a span of 68 years (football was discontinued at U of D in 1964) from a football fan’s perspective.

Each year is represented in digitized football programs containing the names and information regarding players, along with a selection of audio interview files, advertisements from local businesses and supporters,  and, on occasion, a bit of poetry.  Take the 1924 program for example.  That year the season collection begins with the September 27 game against Alma College.  For 10 cents a copy, fans received a full page poem by Edgar Guest on Teamwork (written, we are told, especially for this game), a list of new rules for College football games, a reminder to vote for Joseph A. Martin for mayor (a U of D alumni!), along with the words to the various fight songs to be sung during the game.  Scrolling through the pages of this brief program, viewers can see a sketch of the long gone stadium, an image of the latest model of La Measure’s Dry Cleaning delivery truck, and review the schedule for upcoming games.  The program also reminds readers that ice cream is “the Vigor Food” and the Nunn-Bush shoes are for “He-Men”.

But what is most amazing to this writer is the “uniform” worn during this time (evidenced by the team portrait below from a 1921 program).  Although sports technology had advanced enough to consider player protection, it seems shockingly slight by today’s standards.  Leather helmets were padded to help prevent injury; and padded pants, shoulder pads, and thermal shirts were included with good intentions.  Players also wore cleats on leather shoes, great for distance but not so great for contact with other players.  The uniform also included the “must have” kidney pads worn around the waist, along with gloves and ankle bracers.  And while these very important pieces of football attire were not too expensive for the time, not every player could afford the complete outfit.

Players in these early football years were a hardy lot.  They endured the bloody injuries, the broken noses, the scratched skin of any fighter.  And being a true gladiator for the school was worth the scars and “old football injuries” they carried into adulthood. 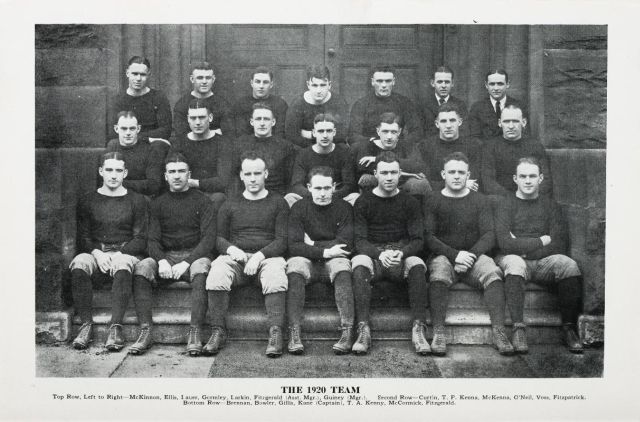 From the 1920 Football Program

We are adding to this archive all the time.  Come take a look at some amazing images from UDM’s archived football history.