In 1963, a lot of colleges and universities (as well as some high schools) were offering Reserve Officers’ Training Corps (ROTC). As part of the Morrill Act of 1862, federal land granted to states for the establishment of institutions of higher learning required that military training be provided as part of their curriculum. Protests that took place during the 1960s over the Vietnam War and the violence associated with all wars, however, influenced the decision to drop ROTC from many schools including the University of Detroit.

In 1963, a student dressed in ROTC military finery was still an impressive sight on campus. The military was part of our national identity and participating in this culture even when the country was not at war was almost a rite of passage for young men during this time. A uniform offered a great way for a young man to appear more committed to the welfare of his country, and more serious about his future. This was the early sixties and in this new decade the patriotic residue of the fifties had not yet completely worn off.

In the 1963 Tower Yearbook, there’s a section devoted to photographs showcasing the ROTC, including the then annual military ball. Uniformed cadets are shown marching in formation on the football fields, sprinting across the campus to make it to class on time, and standing at attention behind the ladies at the ball.

This year seemed to mark the end of innocence for the country and the student population at U of D. The clearly defined line between right and wrong, good and bad, masculine and feminine would soon be blurred, erased, and redrawn. 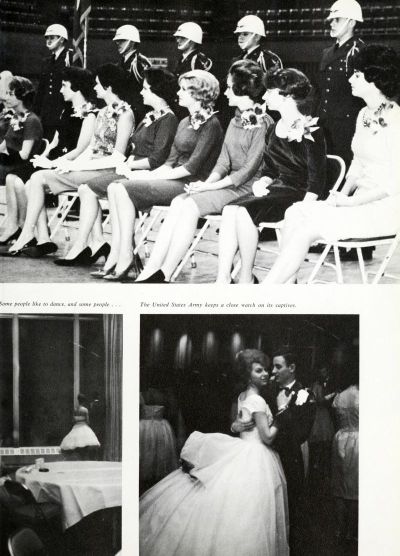 The 1963 Tower Yearbook was unique in many ways.  There’s a lot to explore from this snapshot of 50 years ago.  Take a look!