“Resolved, That the practice of non-resistance to physical aggression, is not only consistent with reason, but the surest method of obtaining a speedy triumph of the principles of universal peace.” — William Whipper, 1837

Among the many speeches and editorials contained in the Black Abolitionist archive are three lengthy speeches delivered between 1833 and 1837 by William Whipper, black businessman and abolitionist.  His were among the first speeches entered into the archive and the ones that had the most profound effect on me.  Reading these speeches encouraged the excited feeling of discovery that would stay with me through the entire archiving project.  Surely, I felt, I had discovered something that few others had seen.  Surely, here is evidence of the seeds of change that would alter the course of this country’s history in the years leading up to Emancipation.

I’m sharing this one speech with you here since it seems timely in light of the 50th anniversary of the March on Washington.  Here is a man in the early 1800s expressing the idea of peaceful change that would be picked up by Dr. Martin Luther King, Jr. over a hundred and twenty years later.  Calling attention to the injustice of slavery as he has in this stirring speech is later reflected in the call of attention to the injustice of prejudice during the March on Washington in 1963.  Each event spurred a nation toward change in a dramatic and inspiring way.

Yet William Whipper was not remembered for his work in urging a reasoned response to the unthinking practice of enslaving a segment of humanity.  The desire for economic gain by those occupying a large portion of this country early on overrode the recognition of the human cost involved.  Religion was used to justify slavery, and later to denounce it.  Reason was left on the sidelines by so many clamoring to reach financial abundance and power.  At some point, there must have been a shift in perception that allowed those in ownership of human collateral to stop acknowledging a sympathetic response to the tears and suffering this institution created.

This speech is 27 pages long, but if you are like me, you will be swept through them by your own interest in the content.  And, like me, you may experience the rapid heartbeat that signals the discovery of something not only important, but quite profound.  I hope so anyway … it’s a great feeling. 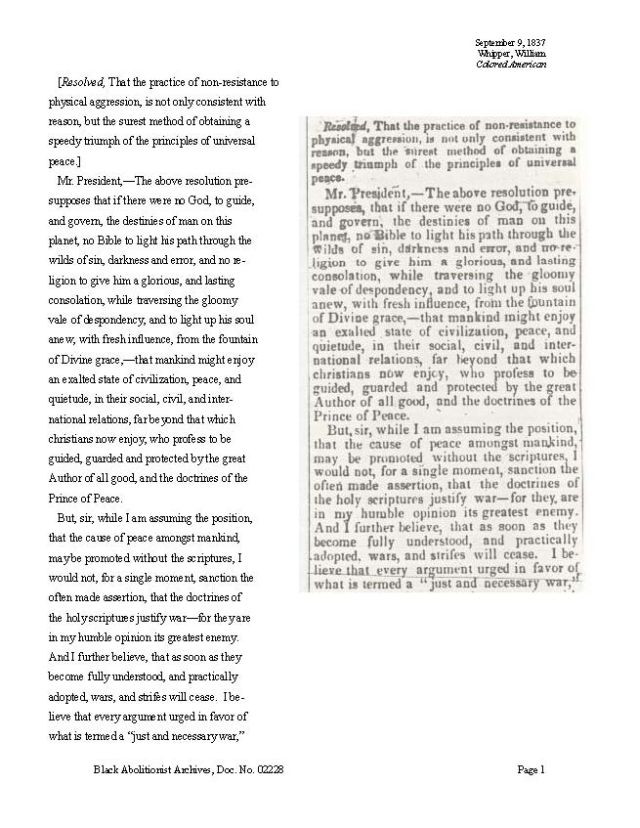