It could very well be that one of the “worst laws in the history of this country” is not what some might imagine.  The Fugitive Slave Laws were created in accordance with the Fugitive Slave Acts of 1793 and 1850. Slavery was bad enough, our entire economy in those days was based on enslaved human labor.  During this time, while some in government worked for a reasoned and compassionate solution to an obvious moral crisis, there were plenty of people in government who could not see any other way to realize economic prosperity for the country.  Ending slavery meant, to them, the complete disruption of a booming economy, a growing national wealth, and a steady increase in power over England.  If we took away the foundation of this economy, what in the world would save us from… disaster!?

The political solution then was to work to discount those who argued for compassion, for change, for a balance between morality and economic stability.  The reaction for the majority of those in power was to hold fast to what was known and not to risk the unknown.  The importance of continuing this institution became paramount, and in order to insure the protection of those who benefited most, laws were enacted to help protect the “property” of the rich and powerful.

The Fugitive Slave Act of 1793 was drawn up and passed quickly as a clause in the Constitution.  It seemed logical and understandable … at first.  In 1850, Congress got more specific with the Fugitive Slave Act of 1850.  The idea was never about the human beings involved, but about forcing the “free states” to return slaves who had escaped to their soil. This was about returning “property” that had ended up in a state that didn’t recognize these fugitives as property.  This was a political law enacted as part of the Compromise of 1850 … a political effort to keep everyone happy.

The “unhappy” part of these laws involved the humanity at the core of them.  Not only were escaped slaves being rounded up and returned as if they were stray cattle, but those free black citizens who had the misfortune of being in the wrong place at the wrong time ended up in the mix as well.  (By the way, a new movie has just been released based on one interpretation of the experience of Solomon Northup, kidnapped and sold into slavery during this time.)

Despite warnings from their fellows and posted flyers and newspaper articles like the one shown here, kidnapping and profiting from the plight of this segment of humanity was prevalent.  Was this one of the “worst laws every created in this country”?  I think it would get my vote. 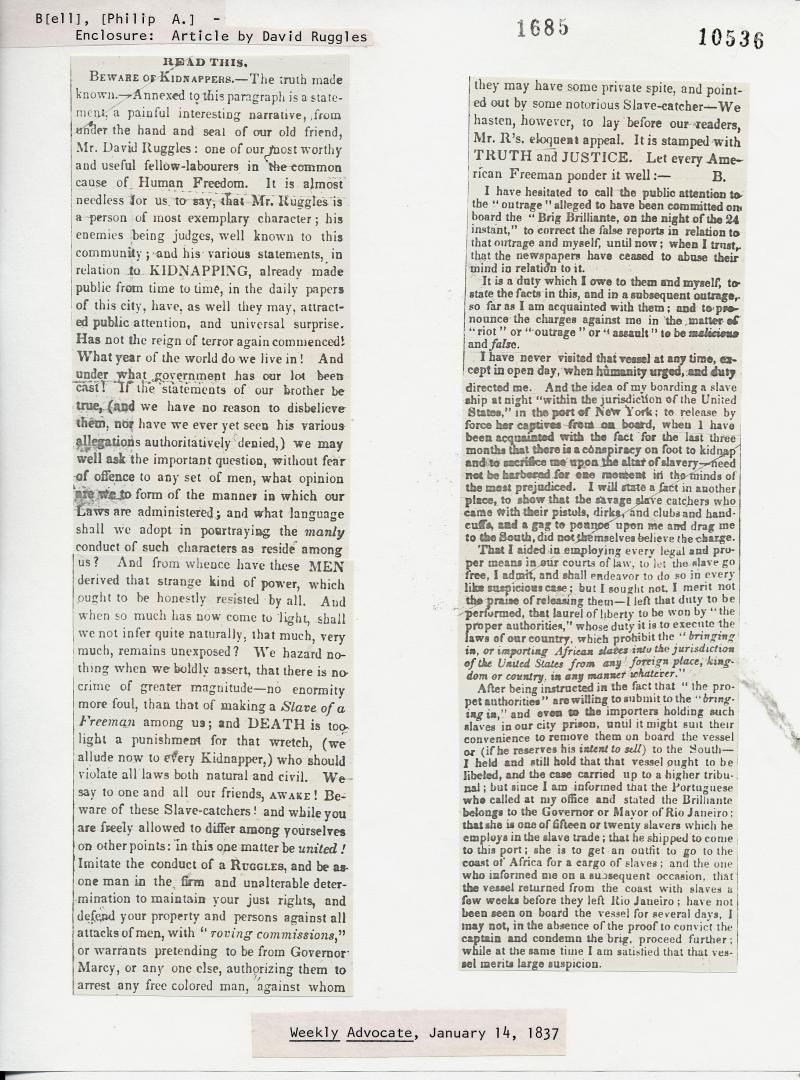 Visit the Black Abolitionist Archive for more on the times and the stories of those who survived those turbulent years.  (Check out the speeches of Anthony Burns for a first hand account of an escaped slave who was captured and returned to his master through the legal exercise of the Fugitive Slave Law.)