“My First Experience as an Aeronaut” December 2013

On December 17, 1903, the Wright brothers made history with the first powered flight at Kitty Hawk, North Carolina. Six years before that in 1897, William Ryan (class of 1902) was writing about his adventure in flight in the Detroit College Tamarack.

It’s likely that William didn’t notice the typo in his essay that put the year at 1950 instead of 1850, but maybe he did.  In those days, it wasn’t that easy to catch and correct an error in the final copy.  This was only one page out of 80 pages in the November, 1897 issue.  Not worth a reprint or recall.  And a reader of the day casually glancing at the story seemingly set in 1950, may have thought the date gave the entire adventure a futuristic quality which could have worked in the author’s favor instead of against him. While Wilbur and Orville were still playing with gliders, an “air ship” of the future may have sounded mighty fantastic to a reader of the day. Reading that this flight would take place in Detroit, on Belle Isle, almost a hundred years from when the essay was printed, probably made a deep impression on anyone happening upon this adventurous tale.

It could be that astute readers caught and allowed for the date error.  Maybe some even remembered a flight in 1850, with this huge ship “built to resemble a pure white dove” hovering above Detroit as it “sailed” out towards San Francisco on that July 4th.

After researching this online, however, I couldn’t find any record of this event.  Now I’m wondering if this really was a typo or if this essay is a work of fiction.  Maybe this event, as grand as it was described, never really happened.  Or perhaps this essay is the only recorded history of the event.  Maybe there was more than one “Queen of the Air” airship.

This is a puzzle waiting to be solved.  There are clues in this essay to help the inquisitive reader, though. The essay tells us that the author read about this upcoming July 4th event in the June 3rd issue of the Detroit Free Press.  It would be interesting to know if this is a bit of history hidden all these years within these yellowing Tamarack pages, or if this is just another example of how creative the students of Detroit College really were.

To read more of this thrilling adventure, visit the Tamarack collection in our Digital Special Collections. 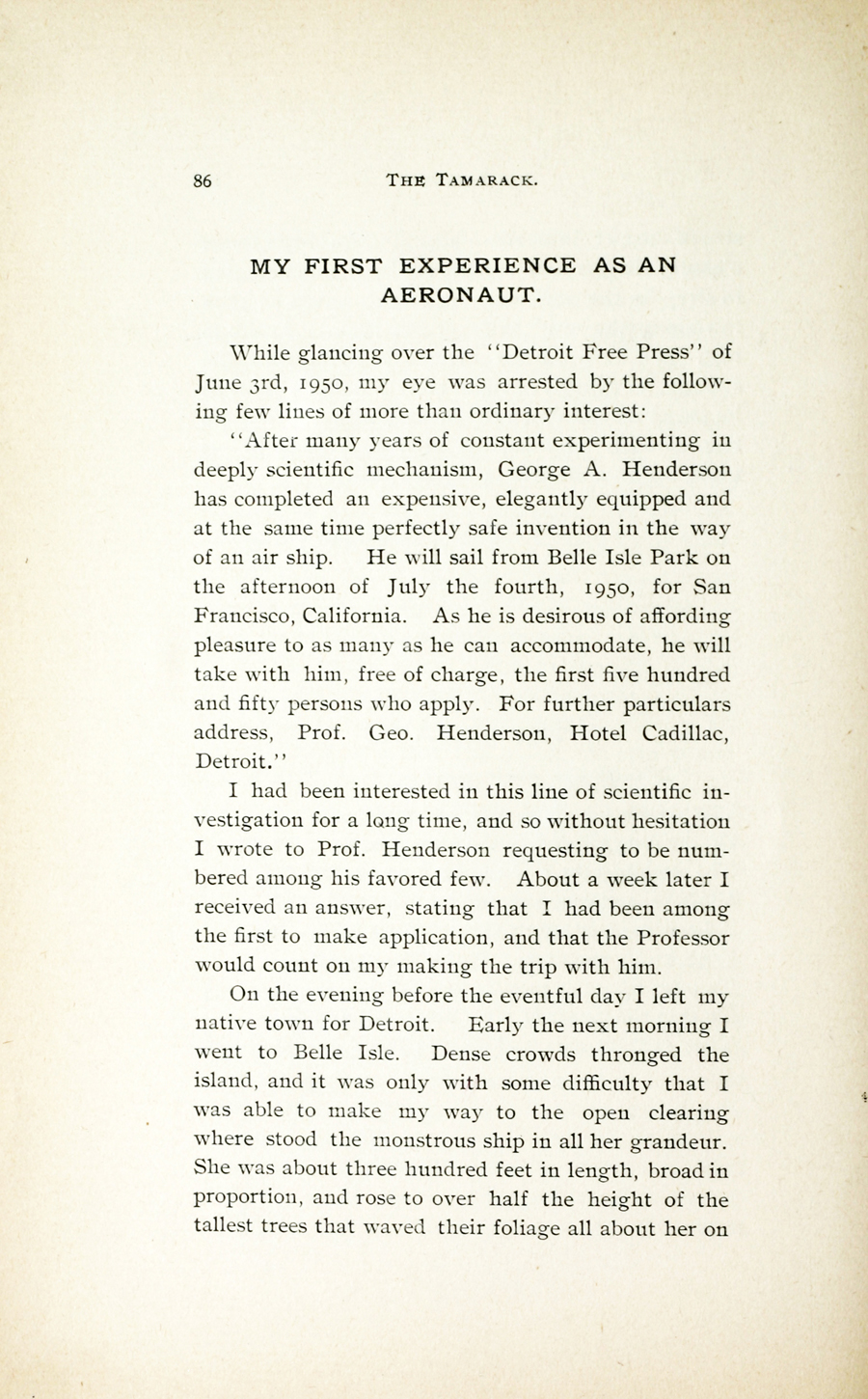