If you love history, or even if you just want to know more about the university, the University Histories collection in our digital archives offers a great resource.  This archive leads visitors on a journey through time from the humble initial foundation work of dedicated men and women, to the distinguished center of education UDM is today.

This archive is made up of PDF versions of books published by Herman J. Muller S. J., and Mary Justine Sabourin, RSM (links to their biographies are included).  Each offers a personal perspective on life in the early days of the university and Mercy College.  In Sister Sabourin’s book Risk & Hope: An Early History of Mercy College of Detroit, for example, is the following impression of Mercy College in August, 1941, just a few days before the start of the first term:

“My first view of the College was a sea of black mud crisscrossed here and there by tracks of heavy machinery. Practically in the center was a very plain, cream-colored block building of five stories…. As we opened the door, I gazed with consternation at the marble stacked on the lobby floor. Beyond the foyer I could see the unfinished Chapel; to the left, unfinished offices. Workmen were jostling each other trying to meet the September 1 deadline. I turned to Sister Patricia and asked, ‘Did you say we are opening our doors to college students on Sept. 1?’ ‘No,’ replied Sister Patricia, apparently unalarmed, “I did not say it. Mother Carmelita said it and I believe her. The residence halls are ready for 60 young ladies; the cafeteria is set up for meals; the classrooms are ready; the faculty have been interviewed and are ready to teach; administration is complete now that we are here. We’re ready to begin tomorrow.” Mercy College of Detroit’s first building was ready on August 26, six days ahead of schedule. She continued, “No one had told the first dean that one of her functions prior to the opening of the school would be to scrub and wax the sanctuary floor on her hands and knees and to decorate the main altar with a profusion of red roses.”

The history archive is a hidden jewel among our digital collections. 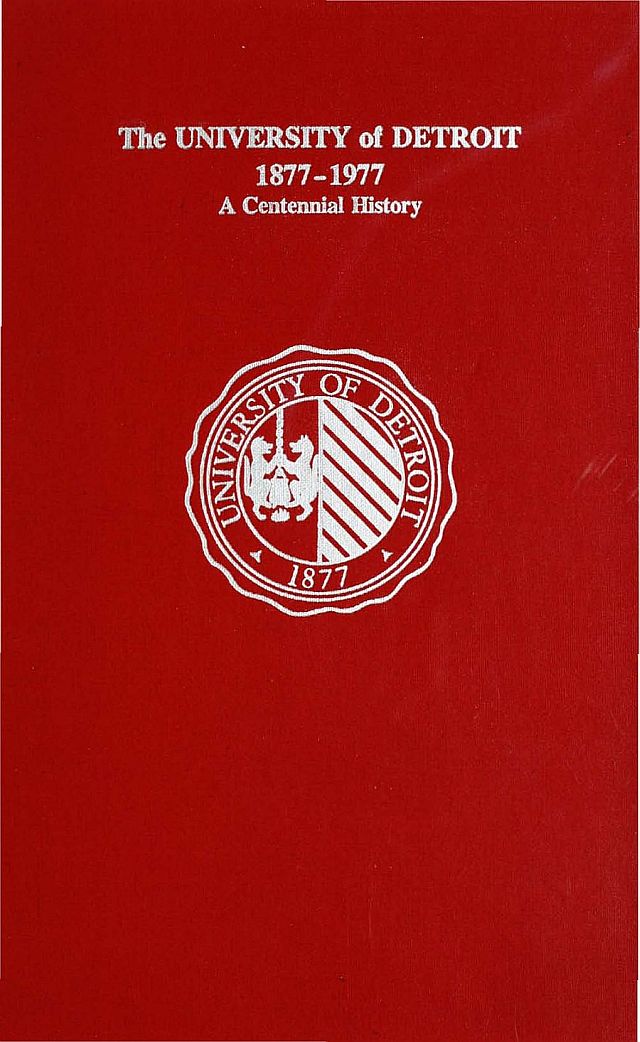 The University of Detroit 1877-1977
A Centennial History