As part of Black History month, the focus of this week’s blog post is on journalist and abolitionist, Philip Alexander Bell (1808-1889).  According to Blackpast.org (described on the site as an Online Reference Guide to African American History), we learn that Philip A. Bell was born in New York City and involved in early abolitionist politics in the Northeast.  He “… attended Colored Citizens Conventions as early as 1830 and established his first newspaper, the Weekly Advocate, in 1837 after working for William Lloyd Garrison’s Liberator.”

In 1860, we find Philip A. Bell in San Francisco working as a journalist reporting on black politics and economics from a part of the country that most people of this time would equate with another world.  He was the lifeline for many who were hungry for news of opportunities and acceptance in this new state (California was admitted to the Union in September, 1850).

“In 1862, Bell joined forces with Peter Anderson to edit the Pacific Appeal, one of the first major black newspapers in California, but he and Anderson soon clashed.  By 1865, Bell established his own weekly newspaper, The Elevator, under the slogan, ‘Equality Before the Law.’  The Elevator demanded California legislators approve the proposed Reconstruction-era constitutional amendments acknowledging black citizenship and suffrage rights.  Bell also regularly editorialized on behalf of expanding black children’s educational opportunities.  California state legislators repeatedly rejected efforts to grant African Americans greater civil rights, but the ratification of the 14th and 15th Amendments allowed black male Californians voting rights in 1870.”

Searching under Philip A. Bell in the “Browse by author/speaker” section of the Black Abolitionist Archive offers readers some of the earliest and most interesting editorials from this turbulent period in American history.  Shown here is the introductory editorial for the Pacific Appeal newspaper (1862-188?)

Want to learn more?  Please visit the Black Abolitionist Archive and step into an unexpected view of history from the minds of those who lived it. 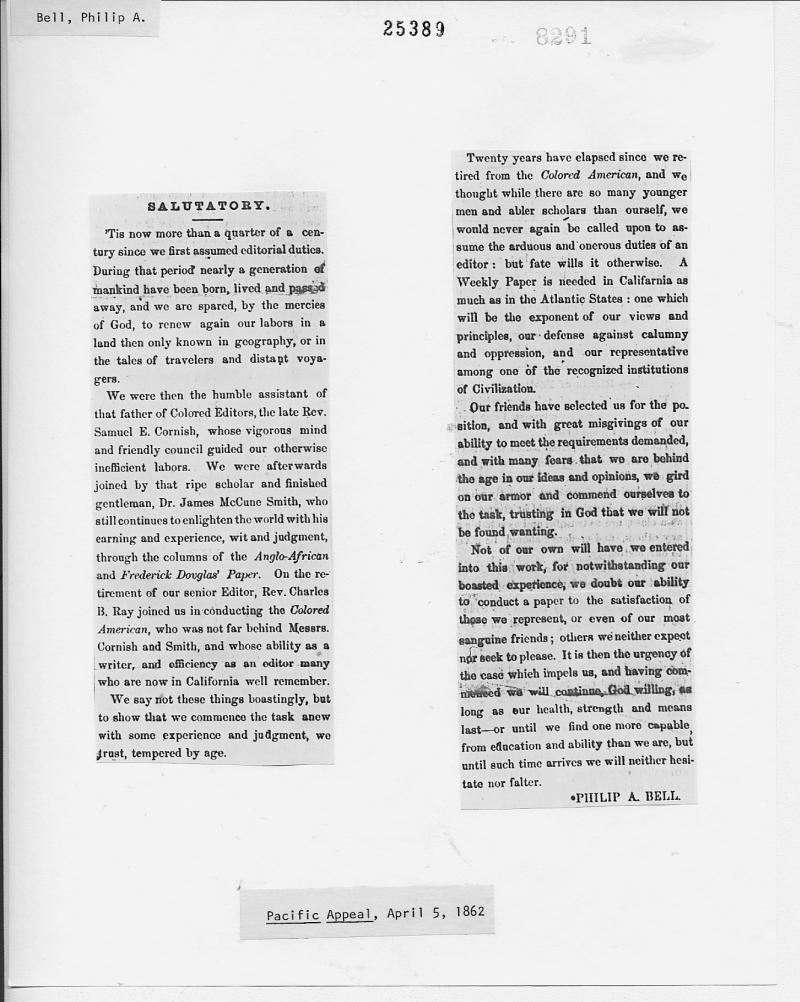