The United States v. Libellants and Claimants of the Schooner Amistad, tried before the U.S. Supreme Court in 1841, was made famous in the film Amistad in 1997.  The National Archives site gives readers more information on the history of this case and the remarkable events that led to it:

”In February of 1839, Portuguese slave hunters abducted a large group of Africans from Sierra Leone and shipped them to Havana, Cuba, a center for the slave trade. This abduction violated all of the treaties then in existence. Fifty-three Africans were purchased by two Spanish planters and put aboard the Cuban schooner Amistad for shipment to a Caribbean plantation. On July 1, 1839, the Africans seized the ship, killed the captain and the cook, and ordered the planters to sail to Africa. On August 24, 1839, the Amistad was seized off Long Island, NY, by the U.S. brig Washington. The planters were freed and the Africans were imprisoned in New Haven, CT, on charges of murder.”

Funny thing about history: it seems the emotional line from the time of the actual event to the present memory of it allows the emotional trauma, excitement, and horror of it to fade into the background of social memory.

In 1997, film maker Steven Spielberg, brought the story to modern audiences in his film Amistad.  But even with this historic drama, there’s something of a distancing between those portraying the event and those who lived through it.

On November 2, 1839, an editorial called “Keep Cool” (shown below) was published in the Colored American newspaper.  But this isn’t the only editorial about the incident published during this time.

Searching the keyword “Amistad” in the Black Abolitionist Archive offers a way to bridge that span of distance and time.  Reading the editorials published between 1840 and 1841 that display regarding the trial offers readers a way of stepping into the experience of the time through the eyes of those who lived through it and responded based on their own struggle with the slave trade, freedom, and disenfranchisement.

The month of February is the perfect time to take a closer look at this moment in history.  In this way, we keep these events in social memory; and those who lost their lives during this turbulent time are not forgotten.

This editorial is a great place to start. 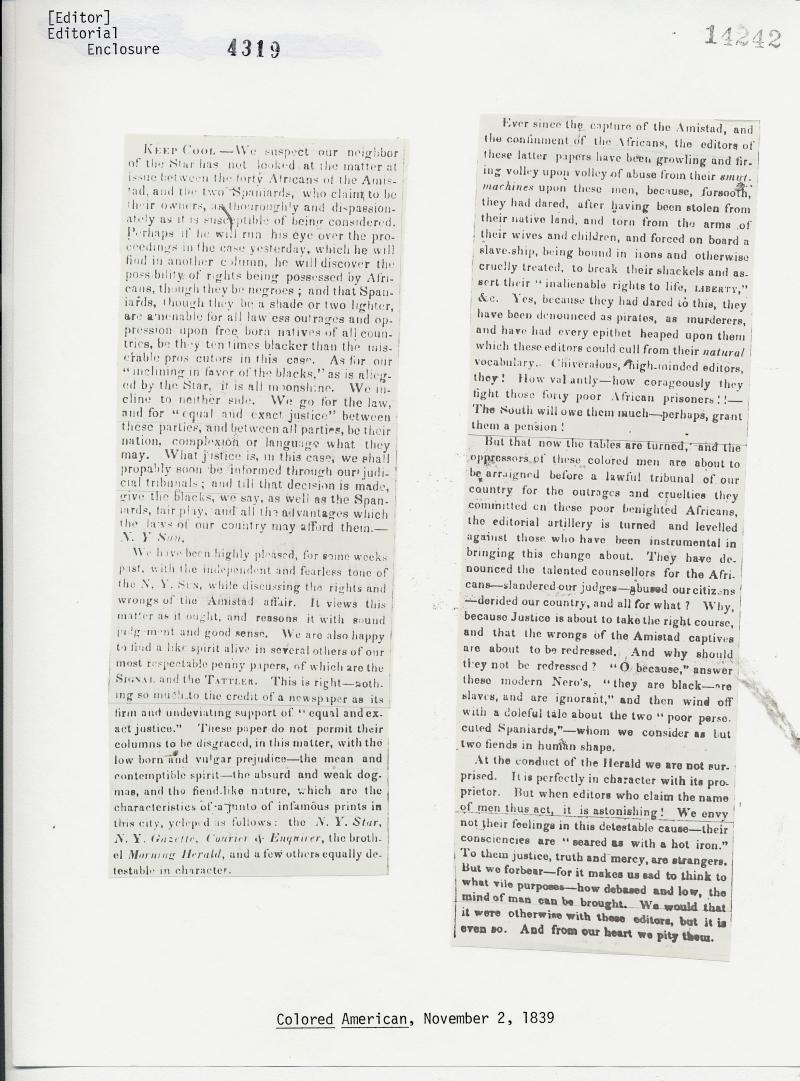