During the years of African-American Newspaper publication in the 1800s, articles would often appear regarding travel across the new territory that was opening up in the western part of the country thanks to the discovery of gold in 1848.  It seemed everyone was anxious to take advantage of free land and wide open spaces. When reporter George W. Turley made his way west in 1863, the Homestead Act offering free land to anyone who would agree to farm the land for five years was only a year old.  Turley, like thousands before him, traveled on the Overland Stage to check out the potential for migration to the West.  His journey is of interest not only to his African-American readers, but to all those considering traveling into the unknown world outside of “civilization” in those years.

The Black Abolitionist Archive contains articles and speeches by prominent and well known men and women working for the cause of freedom.  But it also contains several relatively unknown voices, those who contributed one or two entries to this historic period.  These individuals offer us a sort of “man on the street” view of the experience of being a free black person in a predominately white country that still practiced slavery in 1863.  Slavery would not be abolished until 1865, and Lincoln would not overturn the Fugitive Slave Law until 1864.  Free people of color traveling during this time, were seemingly risking a lot.

Yet Turley’s account hints at a different sort of experience than might be expected during this time.  He not only traveled by stagecoach with a racial mix of passengers, but he was welcomed at the stations and in the restaurants along the way.  He doesn’t mention any sort of ill treatment, and he focuses more on the development of the territory than on his personal encounters while there.  He tells his readers that:

“A vast quantity of land that had been considered arid and unproductive, was now under successful cultivation, and looks as well as any farm in the country. It has all been accomplished through and by a vast aqueduct of ditch, irrigating the whole bottom for miles in length. The road into the gulch, at Golden Gate, has also been changed for the better, by keeping on the hill, instead of going down in the gulch, as formerly. The emigration to this country and to the mountains this season, is greater than has been since the Spring of 1860, mostly families, and among them some few families of color.”

This area was just a few miles from Golden, Colorado, established a few years before in 1859. Gold was bringing this wave of population west, and men like Turley helped to encourage the rapid growth by reporting on what all the hubbub was about.

Times were hard then, people migrating west were plucky if not adventurous or even foolhardy.  But this report offers one individual’s perspective on the excitement of westward expansion that may have been easily overlooked.

George Turley’s account of his travels is three pages long.  Check it out when you have some time.  His journey takes current readers to a time when central Colorado was just beginning to realize its potential. 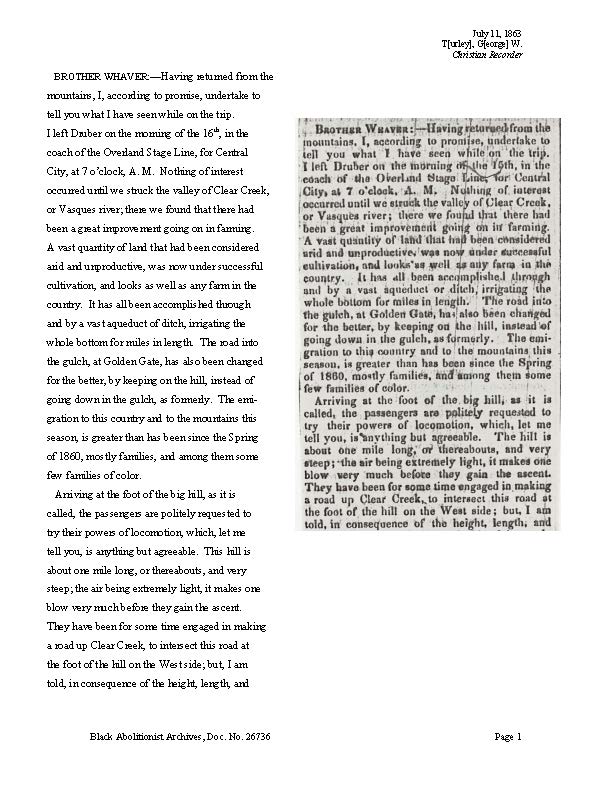