Wikipedia tells the history of the assassination of Abraham Lincoln in dry, textbook form.  Through accounts reported at the time, we learn that on Good Friday (April 14) 1865, John Wilkes Booth put a bullet into the head of Abraham Lincoln, while the president watched a play at Ford’s Theater.  The assassin then made his dramatic escape, and died at the hands of Union soldiers while hiding at a farm in Virginia.  We know the story.  This, along with other major historical events, is part of our education.  We’ve been eased into it since childhood through basic information, animated depictions, and colorful sketches. And while Wikipedia gives us a few more details than we may have had previously, all of it seems distant and impersonal.  We place ourselves as viewers of paintings and drawings of this terrible scene a few feet from the president’s back as the pistol at the end of John Wilkes Booth’s arm discharges.

The April 22, 1865, issue of the Black Republican newspaper offers us a different perspective. Through the eyes of the black population during this time, we are offered a closer witness to this crime from the public side of those who were there, those who lived through that time.  Through reading the account of this tragedy in the columns of the Black Republican newspaper, we’re able to learn the impact on a different segment of society during those turbulent days.  Through these words, we feel the freshness of the wound, the stinging clarity of awareness of something that was never supposed to happen.  We are able to put ourselves in that place, feel the trust and innocence of that age, and relate to the same shock that so many in this (current) generation felt while watching the planes enter the World Trade Center towers on September 11, 2001.  History makes its impression when viewed not as a link to an event in the past, but as a type of conversation between what was and what is now.  Accounts such as this one offer that conversation a voice, one that forms a unique connection between that time and this.

In this eloquent account, the writer blames the mindset that resorts to this type of violence to solve problems on “… slavery, that for two hundred years has educated whole generations in cruelty and the spirit of murder … “  When we think about the assassination of Abraham Lincoln again, we have the opportunity to understand it in a new way. 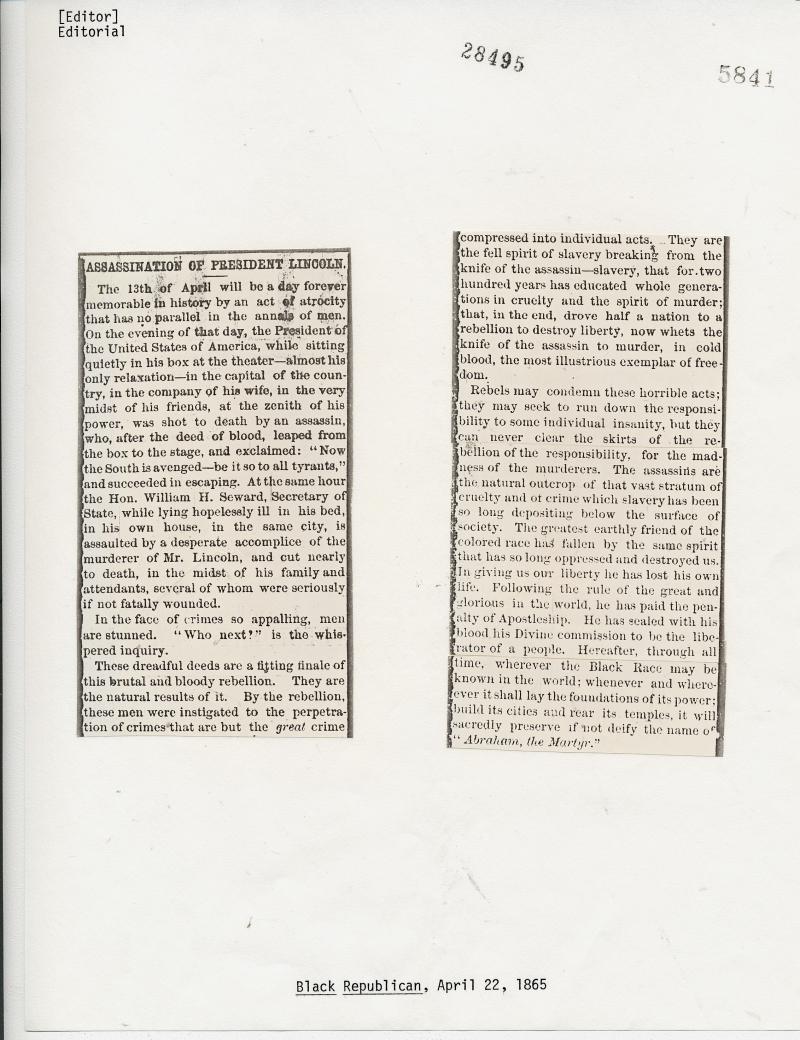